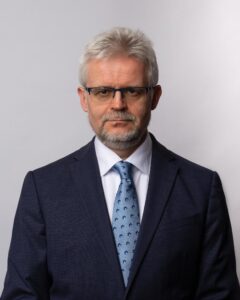 Amb. Dr Urban Rusnák is a Slovak diplomat and analyst. During his tenure as the Secretary-General of the International Energy Charter, Brussels (2012-2021) he promoted the modernisation of the Energy Charter Treaty and the energy diplomacy among the Organisation’s 54 Members and 48 Observers. Before his appointment in Brussels, he led the External Energy Security team at the Ministry of Foreign Affairs of the Slovak Republic. In the 2005-9 period, Dr Rusnák served as an Ambassador of the Slovak Republic to Ukraine, Kyiv, and led the NATO Contact Point Embassy. He was deeply involved in addressing major gas Russia-Ukraine-EU supply disruptions in 2006 and 2009.

Since 1992 he has served in various positions in Czecho-Slovak, later Slovak foreign service. During 1999-2000, he was the Director of the Slovak Institute for International Studies, the Ministry’s foreign policy think-tank. In 2000-3, he worked as the first Executive Director of the International Visegrad Fund in Bratislava.

Urban Rusnák graduated from the Moscow Oil and Gas University in 1990 (MSc equivalent). While posted as a diplomat in Ankara, he learned the Turkish language and completed his PhD studies at Ankara University in 1998. In 2009 he was honoured by Doctor Honoris Causa at Kyiv Slavonic University.