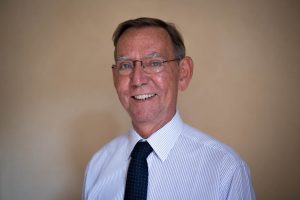 Johan Verbeke joined the Ministry of Foreign Affairs in 1981. He started his foreign service career at the Belgian Embassy in Beirut, followed by assignments in Amman, Bujumbura and Santiago de Chile.

In 1992, he became the Chief Spokesperson at the Belgian Ministry of Foreign Affairs for 2 years. He remained in Brussels for another 2-year period as the “Antici” in the Permanent Representation of Belgium to the European Union.

Johan Verbeke arrived in Washington for the first time in the summer of 1994 to become the Deputy Chief of Mission at the Embassy of Belgium.

In 2004, Ambassador Johan Verbeke was appointed Permanent Representative to the United Nations in New York where Belgium was a Member of the Security Council. In 2008 he moved to Lebanon as the Special Coordinator of the UN Secretary General. Later that year he was appointed the Special Representative of the UN Secretary General in Georgia and Head of UNOMIG.

Verbeke was appointed Ambassador to the United Kingdom in 2010, where he served until December 2013. He received the “Best Ambassador of the year 2011” DIPLOMAT award in recognition of his significant impact on the diplomatic community in London.

He began his current appointment as Ambassador to the United States in January 2014, and presented his credentials to President Barack H. Obama on March 10, 2014.

He is married to Mrs. Catherine Dubois and has three children.