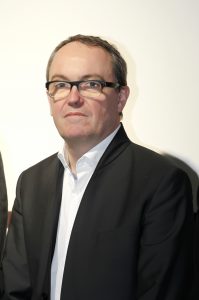 Hans Maria DE WOLF (1961) is an art historian who focuses mainly on modern and contemporary art, philosophy and aesthetics.  He studied at the Vrije Universiteit Brussel (VUB) and the Columbia University in New York.  In 2002 he obtained his PhD degree for a voluminous and fundamentally innovative interpretation of one of Marcel Duchamp’s major works, La mariée mise à nu par ses célibataires même.  Since 1998 de Wolf has been involved in the development and realization of various exhibition projects in the Neue Nationalgalerie im Hamburger Bahnhof, the Museum of Contemporary Art in Berlin. At the Kunsthochschule Berlin-Weissensee he has been giving theoretical art seminars since 2002.  In 2004 Hans Maria de Wolf was appointed Professor of Art History and Aesthetics at Brussels Free University (VUB).  That same year he was invited as a senior consultant by the Palais des Beaux-Arts in particular to develop further relations with Germany.  In 2005 he was mandated the creation of an institute (The Platform, known as the “Brussels model”) in order to create an institutional environment for the implementation of artistic research. He then launched a whole series of prestigious research projects involving some of Belgium’s most famous artists. Since 2009 this global context of intermediation between the worlds of art and academia took on a whole new dimension when he was mandated by Brussels Regional Government to create a first exhibition project for Shanghai 2010. Several other projects would follow, all conceived according to the same philosophy, bringing some of Belgium’s outstanding artists to cities such as Beijing, Hangzhou, Seoul, Gwangju, Chengdu and Beijing again.  Over the years a unique methodology was developed that has to be understood as the intertwining of cultural and academic diplomacy, whereby exhibition projects become the driving force for an intensive interchange including local universities and art schools. In 2011, as the result of a three year long research project, The Crooked Path, an art historical exhibition project on the Canadian photographer Jeff Wall, conceived in tight collaboration with the artist, opened at the Palais de Beaux-Arts in Brussels.  Most recently Hans Maria De Wolf is collaborating with the Chinese artist Xu Bing on an exhibition project that will bring some of China’s most excellent artists to Brussels, while at the same time a Belgian exhibition project curated by De Wolf will be held at the museum of the Central Academy of Fine Arts (CAFA) in Beijing.