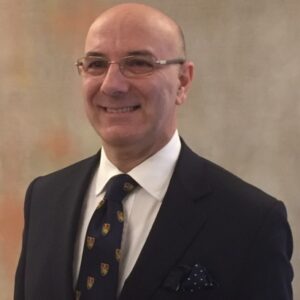 Bashir Bernard Siman, O.B.E. was until recently the UK Special Representative for Financial and Professional Services, and is a Partner at Berlin Global Advisers with responsibility for global geopolitics. He is an international merchant banker by background and has worked in London, Tokyo, Brussels, The Hague and the UAE. He was Co-Chair of the UK UAE Financial and Professional Services Working Group, and of the UK UAE Shipping and Maritime Task Force, both of which are part of the bilateral trade body between the two countries, the UK UAE Business Council. He was a member of the Board of the British Business Group in Abu Dhabi with responsibility for relations with the City of London. He is a graduate of St Lucas- KU Leuven, has an MPhil in Government from the London School of Economics, and a Graduate Diploma from Kyoto University in Japan (where he lived for 10 years). He speaks in addition to English, Dutch Japanese and Arabic. In 2012 he was honoured by HM The Queen with the Order of the British Empire for Services to British Financial Services in the UAE.